Britcar is enjoying some good times this year since they were awarded the title of "British Endurance Championship". But it's nice to see that the more traditional aspect of Britcar remains intact with the Production series as busy as ever!

It's even nicer to see a Works team competing, and it's hard to miss this one since their car is such a bright colour! Mazda MX5s are great fun to drive (Click on Series 1 on the top right of this page to see a S1 MX5 on the Llandow Track guide), and despite what anyone says, are quite definitely proper sports cars. Here's how the team got on at Thruxton

Another Podium for the Mazda MX-5 Race Team
The Mazda MX-5 production race car finished third in class in round four of the Britcar Dunlop Production GTN Championship 2011 at Thruxton Circuit on Sunday 12 June 2011. 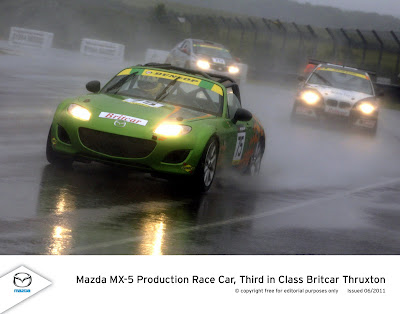 Mazda driver Mike Wilds started the race and handed over to freelance motoring journalist, Jesse Crosse at the half way point. The Mazda MX-5 production race car proved highly competitive in the conditions– thanks to its 50:50 weight distribution, handling and performance.

Also entered by Mazda was the MX-5 GT race car - driven by Mark Ticehurst, Mazda works driver and Owen Mildenhall, racing driver and motoring journalist – and despite poor track conditions, the MX-5 GT led its class for the first half of the race, climbing to fifth overall chasing two Ferraris before an electrical fault saw the car recovered to the pits.
The electrical fault was traced to water in the MX-5 GT race car’s cockpit, and Owen Mildenhall rejoined the race 15 laps adrift of the class lead. After almost an hour and 10 minutes into the two hour race, the conditions were considered bad enough for the race to finish early and the GT race car finished fifth in class.

“Despite adverse weather and Thruxton circuit lending itself to the faster cars on track, we had a great result on Sunday, which is testament to the drivers and the handling and reliability for which the MX-5 is renowned,” commented Graeme Fudge, PR director, Mazda UK.