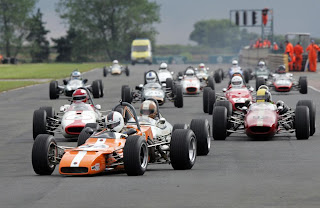 Historic motorsport seems to be all the rage these days with many opportunities to watch the greatest cars in motorsport in action. We've just had the Silverstone Classic, Now it's time for Croft to get in on the historic action with their own event, now in it's second year. All leading up to the big event in the historic racing calendar, the Goodwood Revival. It's great to see so many classic cars still competing.
--
More than 400 classic cars representing some 60 different makes dating from the Forties through to the Seventies will be on display at the Croft Circuit’s second Nostalgia historic motor racing event next month (6-7 August).

The mouth-watering collection of cars, arranged by the Teesside Yesteryear Motor Club, will feature many of motoring’s top names including Aston Martin, Ford, Jaguar, Mercedes, MG, Porsche, Rolls Royce and Triumph and is the latest highlight to be announced ahead of the event. Notably, some 17 E-type Jaguars alone will be present – the E-type is arguably the most iconic car ever produced by the British automotive industry and this year is celebrating its landmark 50th anniversary. Some are capable of fetching up to several hundred thousands of pounds at auction.
Alongside the cars will be a number of rare motorcycles from the same era, plus a vast line-up of WWII machinery including cars, bikes, weapons carriers, tanks and even aircraft to add to the wow factor for visiting public – it is estimated the number of wartime vehicles, organised by the Military Vehicle Trust, will total 100 with many being positioned within ‘living history’ displays.

Indeed, Nostalgia is just as much about entertainment off the track as it is the racing on it and further attractions themed around music, fashion and catering are also part of the bill as visitors young and old are invited to share in reliving a bygone era… A major part of the weekend is for public including children to dress in period style to add to the atmosphere.

Elsewhere, already confirmed are spectacular air displays (on the Saturday) from the evocative Hurricane and Spitfire WWII fighter planes and (on the Sunday) a Jet Provost.
On track, no fewer than 18 races organised by the high-profile Historic Sports Car Club are scheduled to take place during the two-day festival for an exciting variety of saloon, single-seater, GT and sportscars from the Forties through to the Seventies. And the HSCC has indicated that it is presently on course to beat the 180-plus entries registered for last year’s inaugural event. Meanwhile, also on the Sunday, a WWII Chaffee tank will provide further thrills by discharging blank rounds in the build-up to each race. That is after spectators have been taken for passenger tours around the Croft Circuit in period double-decker buses throughout the morning.
Croft Circuit Manager Tracey Morley commented: “With just over two weeks to go, everyone here at our circuit is hugely excited about what is in store for the public during the Nostalgia weekend.
“It’s a golden opportunity for people to attend a major social event that’s all about rolling back the years with of course all the added excitement of a high-octane retro theme based around motoring and motor racing. There is something hugely enchanting about events of this nature – as seen at the likes of the Goodwood Revival and Silverstone Classic events further south – and the Nostalgia weekend is sure to capture the imagination of many people from across the region and further afield.

“In fact, considering Nostalgia is still very much in its infancy, our advance ticket sales have been excellent with calls from all over the UK. We very much look forward to welcoming everyone who attends and sharing in something very special with them.”
Tickets for Croft’s Nostalgia event cost £10 (Saturday) and £12 (Sunday) if purchased by tomorrow (Sat 23 July) from the circuit by calling 01325 721815 or by booking online at www.croftcircuit.co.uk. Admission for accompanied children aged 15 and under is FREE all weekend. Public car parking is also free.
p.s. You may have noticed we've had a lot of press releases from Silverstone and Croft lately, which is great. We'd like to feature as many circuits and venues as possible, so if you want your venue, event or club featured, please get in touch! info@overdrive-uk.com
Posted by Unknown at 12:00