In 4 years of running, Cholmondeley is already becoming a must do event for many motorsports enthusiasts around the country and beyond. Whilst it's often compared to the Goodwood Festival of Speed, it seems that the event is a perfect companion to the more established extravaganza in West Sussex. They both allow people to get close to the cars they love. And Cholmondely is a fantastically diverse event that even features powerboats.

Again, Subaru came to the fore with a blistering time around the sprint track. Like the recent record breaking run on the Isle of Man TT circuit, expert driver Mark Higgins gave many supercars a good run for their money!


The gates closed on another thrilling Cholmondeley Pageant of Power, with the record crowds flocking to see a host of all-new attractions alongside the many established event features.  The organisers have promised that in 2012 the fifth Pageant will be even bigger and better, and a series of innovative enhancements – on track, on water and in the air – are already being evaluated. 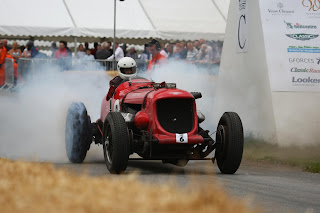 The 2011 Pageant was extended to a third day for the first time this year, with Friday being used by competing drivers and motorcyclists to put in some high-speed practise laps in front of the spectators, as well as for the event’s ‘Magnificent Marques’ sponsors – Bentley, Jaguar and Ford – to invite guests to experience the testing Cholmondeley circuit for themselves.  The addition of the Friday also meant even more visitors could get close to the international field of famous cars, racing drivers and motorcyclists in the paddocks.
Another highly-successful new feature for the 2011 Pageant was the purpose-built Rally Stage, which played host to nearly 30 iconic Group B rally cars blasting across the Cholmondeley estate.  Also new was the Green-Car-Guide-Live! area, which introduced visitors to a host of environmentally-friendly road and race cars.
The competition for fastest lap time on the 1.2-mile circuit was as hotly contested as ever, even if sporadic showers meant that last year’s outright lap record remained intact.  However, the holder of that record, Nikki Faulkner, claimed the Pageant’s fastest lap once again, achieving a blistering best time of 63.54 seconds in his Lamborghini LP570-4 Performante.  He was pushed hard by rally ace Mark Higgins in a Subaru Cosworth Impreza STI CS400 (See below), which proved unbeatable during the rain-affected track sessions.
The Combat Power display by the British Army and the RAF – a unique event in the UK – gave the tens of thousands of spectators the chance to witness how the armed forces operate in real-life combat situations in Afghanistan.  To the accompaniment of numerous ground-shaking explosions, smoke and constant machine-gun fire, troops assaulted an ‘enemy’ position right in front of the spectators.  Tanks and helicopters were used to drop the troops in the heart of the action and then extract ‘injured’ casualties.  As well as thrilling the crowds, the display helped raise much-needed funds for the Pageant’s designated military charities: Combat Stress, Remount and the Mercian Benevolent Fund (MBF).
Out on the largest of the Cholmondeley estate’s lakes powerboats performed 120mph-plus runs on the venue’s lake, while overhead bi-planes, helicopters and gyrocopters provided further adrenaline-fuelled distractions.
During a balmy Saturday evening a biggest-ever crowd arrived for the Pageant’s Fireworks Concert, which concluded with a Proms-style programme accompanied by a helicopter flypast, and cannon salute courtesy of the local Mercian regiment.
In total there were more than 1,200 cars on static display, and 175 racing cars and bikes took to the Cholmondeley circuit.  It is anticipated that, in spite of the wet weather during Sunday, attendance figures comfortably exceeded the record 50,000 total from 2010.
“Despite the occasional intervention of the notoriously unreliable British summer weather, the 2011 Pageant lived up to all our expectations,” commented James Hall, event director at the Cholmondeley Pageant of Power.  “We added a day, introduced some new features and brought in more famous cars, motorcycles, boats, aeroplanes and helicopters to intensify the action.  The feedback has been fantastic and thanks to our sponsors, supporters and a dedicated Pageant team we’ve been able to build on the event’s nationwide reputation as an unbeatable day out.  We’re already working on the 2012 Pageant, and hope to deliver a range of new attractions to thrill the crowds.”
--
COSWORTH IMPREZA STI CS400 SLAYS SUPERCARS
AT CHOLMONDELEY PAGEANT OF POWER 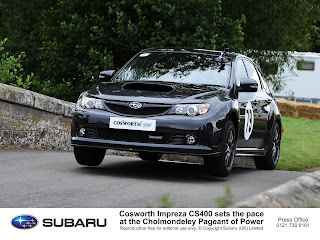 The All-Wheel Drive 400PS Subaru outpaced a host of high-performance road cars and supercars, including the Nissan GTR, Ariel V8 Atom, Lexus LFA and Ford Focus RS500, and in the final standings was beaten only by the £186,000 Lamborghini LP570-4 Performante on the 1.2-mile sprint circuit.
Significantly, on the final day of the event (Sunday 17 July) when the circuit was consistently soaked with rain, the Subaru comfortably outpaced every other participating vehicle. With a quickest time of 68.18 seconds, it was over four seconds quicker than the second placed Lancia Delta Intergrale WRC and six seconds quicker than the second placed car in the Supercar category.
Higgins’ high-speed run dramatically showcased the all-conditions attributes of the Cosworth-fettled Subaru, establishing it as the fastest hot-hatch in the ‘supercar’ class. Mark recorded a best time of 66.08 seconds, at an average speed of 65.45 mph on the twisty Cholmondeley circuit.
“The Pageant’s track is incredibly narrow and asks a surprising amount of both car and driver,” commented Higgins, who recently set the production road car lap record on the Isle of Man TT circuit. ”If you want to set a decent time, good traction, strong brakes and stability at speed are all essential. The Subaru delivered on all those scores. We were only bettered by a Lamborghini LP570-4 Performante in the dry runs and we were the quickest by far in the wet.”
Marketing Director of Subaru UK, Kenyon Neads, commented: “We’re delighted that the CS400 in Mark’s talented hands took the fight so strongly to the supercar elite. Finishing ahead of cars like the Ariel Atom V8 is a real testament to the engineering and development work by both Cosworth and Subaru.
“Ours was not only the fastest hatchback, but also the quickest vehicle in any class when the circuit was wet, which speaks volumes for its capabilities. It was no surprise the Subaru stand in the paddock was a hive of activity throughout the weekend.”
The limited-edition Cosworth Impreza STI CS400 is currently available from Subaru UK priced £49,995 with a number of competitive and flexible finance offers available. For more information please visit www.subaru.co.uk.
Posted by Unknown at 12:00