Welcome to the first in what is hoped to become a regular feature here on Overdrive - Clubman's Cars. Here we'll try and find the best new car to use in club motorsports. The definition we're using to find this car is "a car that may be used every day as a "daily driver" but can also be used, unmodified, for club motorsports."
We've also developed a class system - A+ is for Supercars, A : 2000cc+, B : 1400cc-1999cc and C : up to 1399cc. Forced induction cars have an equivulency formula of 1.4:1 - so this 1998cc Evo X is regarded as having a 2797cc engine
Where better to start than the latest in a long line of road going rally cars, The Mitsubishi Lancer Evolution X. Or to give it it's full title, Mitsubishi Lancer Evolution X GSR SST... Lets just call it the Evo X...
A Brief history lesson. Group B Rallying was banned in the late 1980s for being too fast, too dangerous, and too expensive. It was replaced with Group A as the standard for the World Rally Championship. The rules said that the car could have up to 2000cc turbocharged engines, 4 wheel drive was allowed too - but the rules also said that there had to be a minimum of 5000 cars built of that exact specification, minus the roll cages and other safety measures of course.

Thus was born a new age of homologation specials. Lancia had their Delta Integralé, Toyota had the Cecilia GT-Four. Subaru entered their WRX model, and Mitsubishi took their Lancer model to their in house tuning department, Ralliart, and came up with the first Lancer Evo for the 1993 season - replacing their Galant GR-4 model. Evo II came in 1994, followed by Evo III in 1995.

In 1997 the WRC entered a new era with the new WRC class cars, more technical and packed full of electronics - crucially the 5000 examples rule was relaxed, now only the basic shell of the car had to come from production. But Ralliart stuck with the Group A rules and the Evo, now on generation V won the manufacturer's championship against the WRC cars in the hands of the late Richard Burns in 1998. Ralliart finally abandoned Group A in 2001 where the first Lancer WRC appeared - but the now Evo VII continued to be a favourite in the production class of rally car ; Group N. These cars are still in use even though the new R4 standard is slowly replacing them. Few modifications beyond those made for safety are allowed.

And so we reach the tenth evolution, the Evo X. The first impressions are that it hasn't lost any of it's aggressive rally car looks. This car turns heads, and lots of them. The performance specification is impressive too - 330bhp from it's 4 cylinder 2litre engine, thanks to the large Turbocharger. Actually, long before you see the car you can hear it - it's lovely deep growl appears much louder than it really is. Finer details also impress, the big Brembo brakes sit behind multispoke alloy wheels shod with Yokohama low profile tyres. The car's low stance also makes it seem ready to hit the race track - yet this is a 4 door saloon. It's based on the Lancer, which sits in the same class as a common-or-garden commuter car, but the performance is similar to some sports cars. Sticking with the exterior features, the front headlights are self leveling HID units, which are fantastic - giving a great view of the road ahead in a pure white light. Turn the wheel around corners and extra lights illuminate the patch of road you're about to turn into too, a clever feature. The offset number plate is another attention grabbing feature - A feature that goes back several Evolutions to maximise the amount of cold air getting to the radiator.

Slipping into the Recaro driver's seat immediately puts you in the perfect driving position - although the high sides do slightly impede working the handbrake - The seats, whilst not full racing jobs, support you every where you want support and there's even holes for a pair of shoulder straps should you wish to add harnesses. The thick, leather wrapped, steering wheel features controls for the radio and phone, and the dash is simply laid out with the two dials and a small screen between them. The larger screen provides the sat nav - more about that later, and entertainment system. Below that are the customary heater controls, and below that is the gear stick - and here's a surprise... It's an Automatic.
Mitsubishi actually call this an "Automated Manual" and it goes under the name of Twin Clutch SST - which is a twin clutch system. Basically it's two gearboxes with one common output shaft and two clutches. When you're in first, second is already selected and just needs the two clutches to swap over to change gear very quickly! Either leave it in Drive and let the car do it's thing, or use the sequential style shift on the gear stick or the two aluminium paddles behind the wheel to do the job. I found that there was a very slight delay between pulling the paddle and the gearshift - and the lack of a clutch pedal really threw me! Naturally, if you're reading this feature you're interested in motorsport, possibly competing yourself. The use of a gearbox like this in any competition is something of a grey area - The blue book doesn't say you can't use it, but neither does it say you can!
There are more buttons around - a small toggle switch changes between normal (for driving around town), Sport (for driving very quickly) and Super Sport (for driving insanely quickly) - which raise the rev limits between gear shifts in automatic mode. Apparently this has no affect at all on the manual shift mode! Below the gear shift is the button to change the mode of the active differential. You can have Gravel, Snow, or Tarmac, so there are still some rally genes in there! I didn't have the opportunity to try the car on Gravel - and being July here in Wales, snow's somewhat thin on the ground, so this stayed in Tarmac mode for my time with the Evo.
There's good news for those looking to use their Evo for competition. This could very well be the ultimate standard road legal sprint car. The enormous amount of power on tap from the 2 litre engine means fantastic acceleration. Either using the paddles or leaving the car in Automatic, the car feels like it will reach 100mph effortlessly... then just keep on going. Certainly on the motorway, at 70mph you can feel the car straining at it's lead, begging to go faster. It actually seems bored, settling into a "I-can-do-this-all-day" hum at around 3000rpm.

It's like taking a Tiger for a walk - it always wants to go quicker, it's powerful enough to go quicker with no problem. If you kick it, it will bite you! On a fast flowing B-Road, the lancer comes into it's element. the road holding is fantastic, handling as if it's a slot car on a scaletrix track thanks to it's stiff suspension and high performance tyres. The fantastic Recaros also are a great help to keep you where you should be! Even out here, at 60mph, it feels like it could effortlessly go quicker around the corners. A peek under the bonnet gives a clue to it's performance - a strut brace runs across the engine bay over the Intercooled Turbocharger and the shiny pipes that were added by WRC Developments when they increased the already impressive performance. The turbo itself sits down between the engine and bulkhead and reminds you of it's presence by hissing at you when you open the throttle. However the fantastic performance and handling does not extend to slow speed manoeuvrability. I found it tricky to manoeuvre around car parks, remembering that it's a relatively big car, and it feels it with surprisingly heavy steering (my VW Polo felt weightless after a week driving the Evo!) Quick changes into Reverse are also difficult with the automatic transmission, especially if you start from manual mode - and I really missed the clutch pedal when trying to ease the car into a parking space. The spoiler also does nothing for rearwards visibility, and neither does the high back end of the car - Then again, I'm only 5' 5" so maybe a taller person wouldn't find this much of an issue.

So, if you do want to go sprinting or hillclimbing, this car could be just the thing, or it would even make a decent race or rally car with the necessary modifications (and a manual gearbox). But if you want it as your one and only car, it's got to be practical...
Firstly, the creature comforts. The air conditioning is great - although turning it on causes the engine to increase revs to compensate. And the gadgets you get are brilliant. It comes with a Sat Nav with a funky touch screen. I tried to get this lost - and succeeded by taking it down some of the new bypass roads that are around here. One of them is 2 years old, but didn't show up at all on the sat nav's map. This confused the dominatrix who lives inside the Sat Nav and barks orders at you ("In two hundred yards, turn left... in one hundred yards, Turn Left!... TURN LEFT!!") but as soon as you return to a road which it does recognise, it returns to normal again. Quite where it thought I had been I've no idea. On the subject of practicality, I subjected the car to two tests.

a) Can you get the Overdrive TV crew in it with the filming kit?
b) Can you go shopping in it? 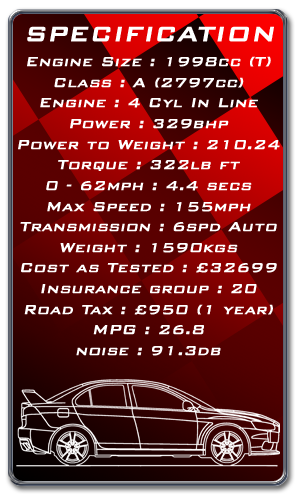 And the answer to both is yes. The back seats easily accomodated Ulrich, our 6' 2" Sound guy, and all the kit went in very easily. And a weekly shop was easily fitted into the boot. Only the addition of folding rear seats would have made this more practical, along with removing the sub in the boot. On the road, the firm suspension makes the ride lumpy over our not very well maintained roads, and there's quite a bit of vibration in the back.

One of the other functions of the sat nav screen is an info panel that tells you just how well you're doing on fuel economy (it also has an altimeter, barometer, and a thermometer). Which brings us to the Achilles' heel of this car if you have to live with it every day... The cost. The best I could get out of it was 26.8mpg which gave the car a range of just over 200 miles. Using 98RON fuel... Ouch! Then there's the road tax - the test car's tax disc showed £950 for 12 months... Not to mention the insurance, which is group 20. I could forgive the car it's firm ride (the great seats make up for that), but I'm afraid I just couldn't live with the high cost of keeping the thing fuelled. It's also a bit expensive to justify keeping as a second "toy" car.

So if you can live with the high cost of fuelling, insuring and taxing the Evo X, it could make you a great car to compete in speed events with and to do shopping in during the week. If you can't... this isn't the car for you.


Scores
Competition Potential : 7/10
Performance : 9/10
Practicality : 8/10
Economy : 26.8mpg
Total : 51
Current rank : 1st
[but we haven't tested anything else yet!]
Photos by Matthew Miller. With thanks to Mitsubishi Motors UK and Llandow Circuit.
Posted by Unknown at 12:00