Croft Circuit can confirm that its retro motor sport-themed festival, Nostalgia, will continue for a third consecutive year in 2012 after it defied bad weather to successfully run the event for a second time.
The Historic Sports Car Club, whose packed race programme forms the backbone to the event, has already requested a date for next year after again being left impressed by the North Yorkshire circuit during its recent 2011 Nostalgia weekend (6-7 August).
Heavy rain on the Saturday threatened to disrupt the event but 16 races were still run thanks to the tireless efforts of the HSCC, circuit staff and marshals.
Grahame White, the HSCC’s Chief Executive, commented: “We were hugely impressed by the enormous effort that the team at Croft put in – their co-operation plus that of the marshals and our drivers meant we still got through the whole programme which was quite amazing.
“Furthermore Croft is a very popular venue with our competitors – the circuit is a real challenge for them and there’s also a very friendly reception all weekend-long. The huge line-up of entertainment off track from classic cars and military vehicles is also superb and means nobody is ever left waiting for something to happen. It is just a hugely enjoyable weekend, in fact one of the highlights of our calendar, and we very much want to return for a third Nostalgia weekend in 2012.”
In total some 240 drivers signed on for competition during 2011’s Nostalgia weekend with more than 250 racing cars dating from the Forties through to the early Eighties in action for the crowds. In addition more than 400 classic cars plus 100 World War Two military vehicles were on display while numerous side shows themed around music, fashion and living history from the Forties-Seventies added to the value-for-money-entertainment for the public. Admission for children aged 15 and under was free all weekend. 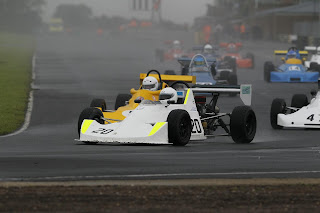 Croft Circuit manager Tracey Morley commented: “We’ve had our fair share of rain down the years but the weather we experienced on Nostalgia weekend was extreme by anyone’s standards. I cannot praise enough our staff, marshals, the HSCC race officials and competitors, Teesside Yesteryear Motor Club, Military Vehicle Trust, the exhibitors and of course public for the terrific spirit and goodwill they displayed in what were very difficult circumstances.
“The feedback has been nothing but positive and we know all will be returning in 2012 to be part of this fabulous event again. We still have a busy schedule of events to complete in 2011 but hope to announce our 2012 Nostalgia date in the near future.”
Still to come at Croft Circuit in 2011 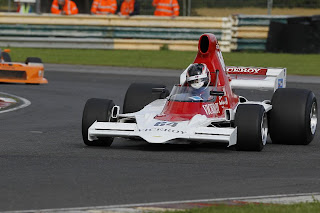 Indeed there are still four ‘stand-out’ motor sport events for the public to enjoy at Croft Circuit this year. As ever, admission to all will be free for children aged 15 and under with adult tickets costing no more than £10 per day. For more details call Croft Circuit on 01325 721815 or visit the www.croftcircuit.co.uk website.
The first two of those four events are for cars on the weekends of 10-11 September and 24-25 September and headlining the bill of action at both will be the penultimate and then title-deciding final rounds of the Darlington & District Motor Club’s hotly-contested Northern Sports and Saloon Car Championship. Its 60-plus entry consists chiefly of competitors from in and around the North East region and is recognised as one of the best supported club-level race championships anywhere in the UK.
For two-wheel fans, Croft will host the visiting Derby Phoenix Motorcycle Club’s race championships on 15-16 October – a number of local aces are expected to take part as ‘wild card’ entries.
And then it is back to four-wheeled action on Saturday 3 December when Croft Circuit hosts a competitive timed special stage for more than 100 cars competing in the touring Roger Albert Clark Rally – renowned as one of the world’s best events for historic rally cars. The stage, featuring two ‘laps’, will be run twice meaning the exciting prospect of several cars in action against the clock at the same time. Croft’s vast race paddock will also become a major service area for the afternoon providing the public with a golden opportunity to watch mechanics busily working on the cars. The line-up of machinery, dating from the Sixties to the early Eighties, is set to include ‘old favourites’ such as Ford Escort MkIs and MkIIs, Vauxhall Chevettes, Lancia Stratos and Fulvias, Saab 96s, Mini Coopers, Porsche 911s, Triumph TR7s, Opel Asconas and Renault 5 Turbos.
Fans can further keep in touch with what’s happening at Croft Circuit online via Facebook (look up CroftCircuit), Twitter www.twitter.com/croftsupporters and even ‘own’ a little bit of the circuit by joining the Supporters Club. See www.croftsupportersclub.com or email enquiries@croftsupportersclub.com for more details
Posted by Unknown at 12:00