Mazda works teams ready to go around the clock 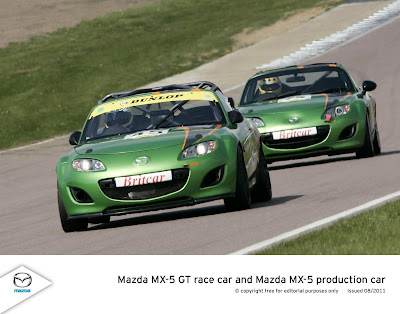 Mazda UK has entered three MX-5s into the Britcar 24hr race at Silverstone on 1 October. The three Mazdas will be taking on rivals Seat, BMW, Lotus and Ginetta on the 3.666 mile Silverstone GP circuit. Two of the cars are production race cars based on the Mazda MX-5 2.0i Soft-top Sport Tech alongside the world’s fastest and lightest Mazda MX-5, the MX-5 GT car. This is the fourth time that Mazda UK has entered the Britcar 24hr race, previously with the rotary engined Mazda RX-8 in 2005 and 2006 and two Mazda MX-5 production cars in 2010.

The three race prepared Mazda MX-5s will be relying on their handling, nimbleness, and lightness to reduce pit time through fewer tyre changes and frugal fuel consumption, while maximising track time to beat the race thoroughbreds including Seat, Honda, Lotus and BMW. The cars are expected to complete 1,000 competition miles in 24 hours making this the most gruelling race in the British motor racing calendar.
Currently, the 850kg Mazda MX-5 GT ranks fifth overall in the championship and third in class, while the Mazda MX-5 production race car, which is essentially a standard MX-5 with safety modifications required by the Motor Sport Association, is fourth in class and eighth overall. The entry is in keeping with Mazda’s challenger spirit - competing against much faster race cars but relying on the attributes of the MX-5 to bring victory within its grasp. 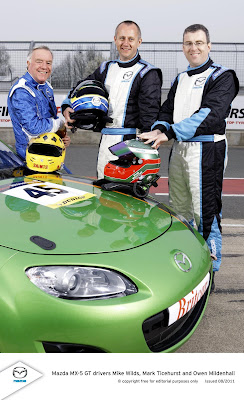 Over the 24 hour race each car will be driven by a team of four drivers. The line-up for the MX-5 GT race car see regular drivers Mark Ticehurst from Hassocks, West Sussex and motoring journalist and racing driver, Owen Mildenhall from Dartford, Kent joined by Le Mans veteran and ex F1 driver Mike Wilds. The first of the two production MX-5 race cars will be driven by a team of four journalists: freelance journalists Andrew Frankel and Jethro Bovingdon, Ben Anderson from Autosport and Matthew Prior from Autocar.
Driving the second production MX-5 race car will be a team raising the profile of British Armed Forces Charities in motorsport. These include The Not Forgotten Association – one of the 2011 chosen charities for the RAF Typhoon Display Team, of which Mazda is the 2011 vehicle sponsor, Help for Heroes, the 'Soldiers’ Charity' - the Army Benevolent Fund, Forces Children's Trust and Scotty's Little Soldiers.
Leading this team will be Major James Cameron of the 2nd Royal Tank Regiment (2RTR) based at Tidworth in Wiltshire. James has just returned from Afghanistan where he commanded the Warthog Group - Task Force Helmand's independent armoured Squadron.   He is joined by Brigadier Mike Hickson, the Director of the Royal Logistic Corps.  Mike is a keen racer, campaigning in single seaters as well as racing classics, most recently at Silverstone and Le Mans. Former Royal Signals Sergeant Will Browning is the third driver, a keen racer and drifter from Bath who is now a Metropolitan Police Officer in the London Borough of Hackney.  Completing the line up is TV presenter and racer Tony Jardine, an ardent supporter of Forces Charities and himself the son of a Royal Navy pilot.
The Forces MX-5 will be supported in the pit garage by soldiers from the 2nd Royal Tank Regiment including some who are recovering from injuries sustained while on operations in Afghanistan. 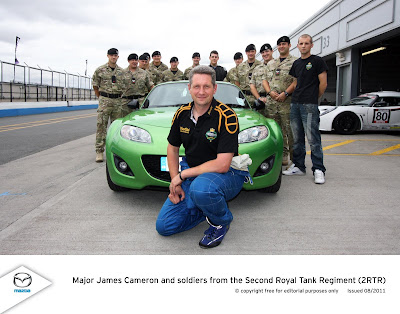 “In just our first year of racing the MX-5 GT race car we are currently fifth overall in the championship which has included two podiums and we are third in class. The Britcar 24hr race will be a true test of our award winning roadster’s ability,” comments Graeme Fudge, PR Director, Mazda UK.
“It is an honour to support these British Armed Forces charities with an MX-5 race car and with the team’s endurance spirit combined with the handling, reliability and durability of the car, we are hopeful of a good result.”
The Britcar 24hr race starts on Saturday 1 October and the winning car will be the one that completes the most laps of the 3.666 mile circuit in the 24-hour period.
The MX-5 GT features a modified Mazda engine that produces 275bhp, a manual sequential gearbox and race differential. On the exterior, the Mazda MX-5 GT boasts a Spirited Green metallic body colour - a first on the MX-5 for Mazda UK - complimented by Jota Sport corporate coloured liveries in orange and grey.
For further information on the Mazda MX-5 GT race programme go to www.mazdamx5racing.co.uk or simply click here to download the free Mazda MX-5 GT motorsport iPad app from the itunes store.
Posted by Unknown at 12:00