In excess of 70 competitors could be turning out for their season finale at the North East’s premier motor sport venue, just south of Darlington off the A167 and very much a ‘spiritual home’ for the NSSCC which has thrived in 2011 – indeed nine different classes have attracted booming grids, a wide variety of car and highly entertaining racing making it one of the best local club championships in the UK.

The NSSCC’s title showdown headlines a packed programme of 19 races in total during the weekend which is being run at Croft by the famed British Automobile Racing Club. Six other hotly-contested series are also in action including: Dunlop Production Touring Cars, Scottish Legends, Intersteps single-seaters, Mini Miglias, Mini Se7ens and Austin Healeys.

Meanwhile Terry Wright, Darlington & District MC Chairman, commented on the success of its NSSCC: “Croft is a fitting venue to end our season which has been one of our most successful to date. We’ve worked hard to build numbers and there is now a great buzz and camaraderie among the members. It’s very sociable and that leads to a lot of respect and good, clean racing out on the race track.

“Nor is the paddock male-dominated – it is full of families who all help out one another if there’s a problem. We’ve made every weekend a ‘double-header’ to keep the number of events down and keep costs sensible by motor sport standards – our calendar still includes seven fixtures at four very challenging circuits. The bottom line is value for money and making it fun for our competitors, the circuit officials and marshals and the public who come to watch us.”

On the track this weekend, York’s Mike Cutt is almost certain to become the NSSCC’s new 2011 Champion thanks to his domination of Class B this season which has seen him achieve wins every time out in his BMW. Martin Lightfoot (Stockton-on-Tees), the runaway leader in Class E3 in his Striker kit car, and Cutt’s closest Class B rival Ken Hall (Middlesborough), in his MG Metro 6R4, can still pip him but require minor miracles.

Several of the nine class titles up for grabs also remain wide open. Notably, outgoing 2010 Champion Paul Moss (Darlington) can’t rest easy just yet in Class D. While he’s been on winning form of late in his Citroen Saxo, Peter Dixon and Simon Gibson – both in Hondas and both from Bishop Auckland – are within striking distance.

In addition, David Cox (Darlington) and Richard Ralston (Harrogate) will go into the event just six points apart at the top of Class C in their Peugeot 205GTi and Renault Clio respectively with more than 40 points still on offer. 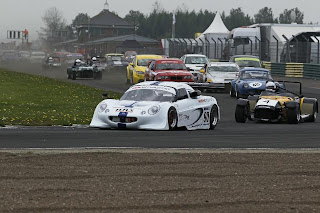 The weekend’s timetable begins on the Saturday morning (24 Sept) with qualifying for all categories followed by eight races in the afternoon, starting at 1.00pm. A further nine races will follow on Sunday starting at midday.

Tickets (payable on the gate) cost just £12 each day. As ever at Croft, admission for children aged 15 and under is FREE all weekend. For more details visit the www.croftcircuit.co.uk website or call the circuit on 01325 721815.
Posted by Unknown at 12:00