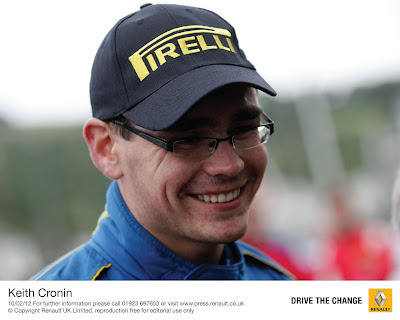 Irishman Cronin’s appearance will be his second on the event, contesting it in 2008, three years before it debuted as the BRC opener, but Marshall has experience of the Dorset and Hampshire stages, finishing fourth alongside Adam Gould last year. Having made a sensational BRC debut in 2009, winning at his first attempt, Cronin became the first Irishman to take the title since Billy Coleman in 1974 and the first from the emerald isle ever to win it twice.

“I have been working hard to get deal to compete at International level but so far I haven’t managed to secure anything. When the opportunity to drive the R1 Twingo came up, I accepted and I am really looking forward to driving the car. Let’s hope I can show what the car is capable of doing and provide a competitive bench mark for the other Twingo competitors.” said Cronin.

Cronin’s will be a one-off promotional appearance in the car which has been prepared and will be run by the official Twingo Renaultsport Trophy UK technical and parts suppliers Monster Sport Europe.

“The Twingo Trophy is new to the UK this year and this will be the first competitive outing for the R1 variant on gravel.” explains Trophy Manager Simon Moss, “So we wanted to make a bit of a splash and Keith kindly agreed to take the challenge. I’d like to thank Mantis Performance Car Care for making this possible, as the car will run under its colours.”

For information on the Twingo Renaultsport visit www.renaultsport.co.uk
Posted by Unknown at 12:00