Rallye Sunseeker, Manufacturer's round up.

Citroën is pleased to announce that it will be supporting the MSA British Rally Championship as an official manufacturer for the 2012 season.

With updated rules for the upcoming season - which specify two-wheel-drive machines - more emphasis is placed on driver skill, increasing the opportunity for Citroën to find the next Sébastien Loeb of the future and also develop its growing young driver programme in the UK.

A number of privateers will drive a Citroën DS3 R3, the 210bhp customer rally car developed by Citroën Racing in the 2012 MSA British Rally Championship. With the new rules, Citroën will be eligible to earn points scored by privateer teams in the manufacturers’ championship.

The MSA British Rally Championship remains the largest and most prestigious national rally championship, comprising six individual rounds across the UK. It was originally run in 1958 and earned a license from the Motor Sports Association (MSA) in 1999.

BRC Manager Mark Taylor commented: ‘It’s great that Citroën, with such a strong rallying pedigree, has joined the Championship, and we look forward to working more closely with them going forward.

‘We recognised the commercial realities currently faced by car manufacturers and their dealerships and specifically created a British Championship to attract UK Importers by reducing the usual barriers and high cost of entry. We are providing them with a platform to promote products that relate to what is being sold in the showroom. We are also offering them high quality media products and a chance to engage in rally themed dealer events. Importantly, they will have a stakeholder status in the future of this world renowned motor sport series.’


The Citroën attack for this weekend’s opening round - Rallye Sunseeker International - is a strong one. Three young guns, Osian Pryce from Wales, Desi Henry of Northern Ireland, and the number one seed, fast Finn Jarkko Nikara will line up on Saturday in Bournemouth with their striking new privately run Citroën DS3 R3’s.

Nikara, the 25 year old from Saarijarvi in Finland has an impressive C.V. to date, as he switches to the 210bhp Citroën DS3. The former Finnish Junior Champion, and 2008 Pirelli European Star Shoot-out champion, has shone in the British Championship before, finishing sixth in the 2010 series using an R2 specification Renault. He has also been an extremely fast Group N driver at IRC and WRC level, and now relishes the chance to drive an R3 machine. “It’s fantastic to be returning to the BRC with Autosport Technology and to be driving the Citroën DS3 R3T – I know this is a very good car and I’m sure we can be setting fastest stage times. We won’t have time to test the car before this event, but the plan is to find a pace we’re happy with.” Jarkko’s first opportunity to drive the car will be in the event shakedown.

At number 9, 2011 Citroën Racing Trophy UK winner Desi Henry debuts his recently acquired DS3 R3. Teamed with co-driver Niall Burns and run by John McKillop Motorsport, Desi will be one to watch. The 22 year old from Portglenone in Co. Antrim has only had a short gravel test to try and learn the very different characteristics of the turbo-charged DS3, which differs from his familiar Citroën C2 R2 Max. “The DS3 seems very good. It’s a very deceiving car at times, as it’s a lot quieter than the C2 Max, but it’s a fast car. We haven’t had that much mileage in the car, but certainly we will be trying hard at the weekend, and hopefully on Thursday’s shakedown we can settle in more. I’m definitely looking forward to it.”

The youngest of the Citroën runners is Osian Pryce from Wales, who will actually celebrate his 19th birthday on the eve of the rally! Seeded at number 10, Osian started his rallying career in 2008, competing in the Latvian Rally Championship from the tender age of 16. On his WRC debut on the 2010 Wales Rally GB, he took class honors by a staggering 22 minutes, before becoming the 2011 Fiesta Sport Trophy Champion. Now, however, he has switched to Citroën for 2012. Osian is happy after a test in the new car. “It’s a big step from last year’s R2 machine, but I could tell as a driver that Citroën Racing have put a lot of work into the car. We probably did 80 kilometers or thereabouts at Sweet Lamb and I really felt at home with DS3. It seems in some ways effortless to drive, and suits a smooth, tidy style. I am really looking forward to the Sunseeker and the BRC in the car. Our plan for the event however is to get a decent finish, as really it will be the first time we have measured ourselves against this line up of drivers.” Co-driver for the Welsh youngster is Iestyn Williams, whilst the car will be run by Andy Davies of Davies Motorsport.

Another young Welsh driver, Tom Cave has also taken delivery of a DS3, but he expects to debut it on round two of the British series, the Bulldog. With the possibility of another DS3 for that round and the fact a Trophy for the DS3’s will start on the Bulldog rally with generous prize money, things are looking good for the Citroën drivers in 2012. It all kicks off with the Rallye Sunseeker ceremonial start, at Poole Quay in Bournemouth where an expected 10,000 plus crowd will turn out to wave in a new era of the MSA British Rally Championship. Then twelve loose surface special stages on Saturday will decide the winners as Jarkko Nikara leads the field into the forests. 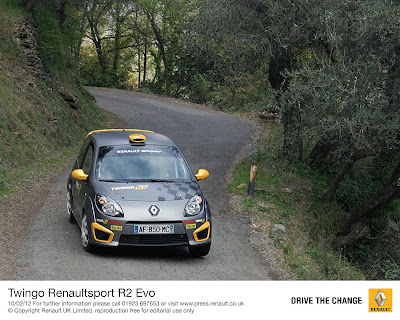 
The car, which is the latest variant of the successful 1.6-litre Twingo, will act as a course car ahead of the main international field and will be run by Renault Sport Technologies’ own engineers. The Twingo R2 in its existing form has already tasted success on Rallye Sunseeker International, a pair of Autosport Technology cars taking the top two podium steps in Formula 2 in 2011, the ultra reliable multinational team going on to take the British Teams Rally Championship at the end of last season.

Dale has already complimented the Twingo, having driven Pajunen’s car at a sponsor’s day last year and the R1 variant at this year’s BRC Media Day. He and Bargery will team up after last contesting the BRC in a Clio in 2006 to showcase the new Twingo R2 Evo, which will make its UK debut on the Dorset & Hampshire based event.

Renault UK’s recent registration to this year’s British Manufacturers Rally Championship and the new Twingo Renaultsport Trophy coupled with around a third of the entries on this year’s opening round, underlines the French marque’s commitment to UK rallying.

“We are keen to show off the new Evo version of the Twingo R2 and evaluate its performance on gravel. The British Rally Championship’s move to a two wheel drive formula is important to Renault and we intend to be at the forefront with our range of cars,” said Renault Sport Technologies Sales Manager Jean-Pascal Jocou, who will attend the event to keep an eye on not only Dale’s progress, but all the Renault competitors.
Posted by Unknown at 12:07