I have a small gripe about this press release. Whilst we of course welcome all releases to do with British club and national motor sports, it seems odd to have all the money in Euros, which we of course don't use here in the UK! Nonetheless, Citroën, Ford, and Renault's initiatives in this year's British Rally Championship should be applauded for bringing some much needed backing to the sport at this time of economic difficulty.

I'll do the currency conversions myself... 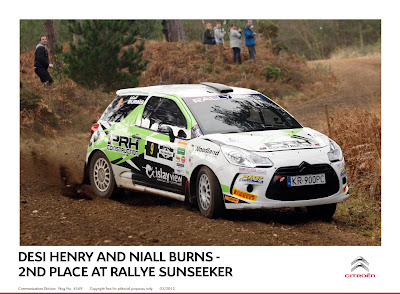 Following on from the successful outings by the Citroën DS3 runners on the Rallye Sunseeker, Citroën Racing are delighted to announce the exciting 2012 Citroën Racing Trophy UK, with a fantastic prize fund on offer. Starting on round two of the MSA British Rally Championship, the Bulldog Rally on 23/24 March, the Citroën DS3 R3 mounted crews will be competing for a fabulous 6000€ (£5000.87) prize for an overall victory, with 3500€ (£2,917.18) awarded for second place and €1500 (£1,250.22) for third.

The Citroën Racing Trophy UK will be decided over the best five out of six scores, the positions earned on the weekend’s Rallye Sunseeker counting for the series. Citroën UK are also eligible to earn points scored by privateer teams in the manufacturers’ championship, which started from Rallye Sunseeker. The registration fee for the crews is 1500€ (£1,250.22), and in return for this they will not only qualify for the prize fund, but also receive a pair of Citroën Racing rally overalls, fire-proof underwear and heavy duty rally jackets.

Trophy co-ordinator Raymond Moore is delighted with the news. “It’s great to work with Citroen Racing on this and I’m very much looking forward to the new Citroën Racing Trophy UK this season. For me it’s an exciting time, working with a new car in the DS3, and some new driver’s also. It’s really a new venture, and I was very happy to see the performances of the DS3’s on the Sunseeker last weekend. I think the new format of the BRC, for two wheel drive cars is also new and certainly will provide some thrilling races if last weekend is anything to go by.”

BRC Manufacturer Standings after Round One