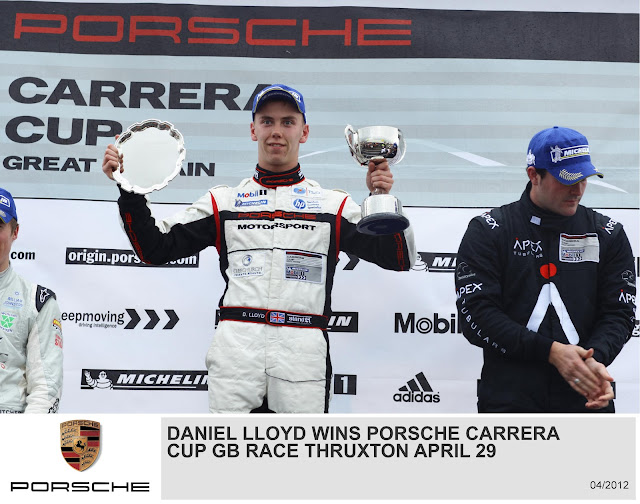 Michael Meadows and Daniel Lloyd shared the victories in rounds five and six of the Porsche Carrera Cup GB at Thruxton on April 29, as dreadful weather conditions made it one of the toughest race days in the 10-year history of the Carrera Cup. The victory for Carrera Cup Scholarship winner Daniel Lloyd in round six followed a terrific race between the identical 450 hp Porsche 911 GT3 Cup race cars, the drivers battling it out with a combination of slick racing tyres and a wet track. 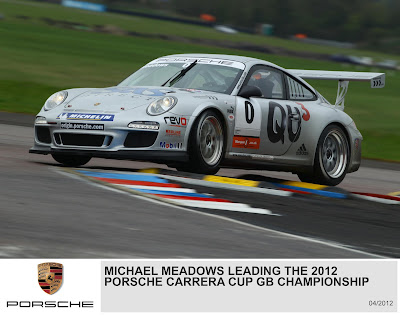 Meadows drove a superb race as heavy rain and wind made for a truly challenging opening race, the fact that every car finished unscathed was testament to the skill of the drivers. That remarkable achievement was repeated later in the day to the enormous credit of every driver on the Carrera Cup grid. Ahmad Al Harthy claimed the first of two Pro-Am1 wins, while Tania Mann bagged maximum points in Pro-Am2 after her first experience of racing in the rain.

With the track awash, the race started behind the Safety Car to allow drivers to explore the conditions. After three laps, the pace car peeled off into the pit lane and the race started in earnest. Richard Plant (Sheffield) got the jump on Meadows (Banbury) and was actually ahead before they reached the start line, but Meadows bided his time and edged by as they raced through the Complex on lap eight.

Once ahead, Meadows quickly built his lead and was able to ease back over the closing stages as the rain continued. “I didn’t get a great start, but once I got ahead it was a lot easier,” he said, after extending his overall Championship lead. “But the conditions were terrible.”

Plant soon came under attack from Ben Barker (Cambridge) and a trip across the kerbs removed the front splitter from nose of Plant’s car. That left Plant powerless to defend and Barker clinched second, before the chasing Rory Butcher (Kirkcaldy) also closed in and took third from Plant. “There was zero visibility when running behind another car,” said Barker after a strong drive. “Once I got past Richard it was a lot easier.”

Butcher revelled in the rain to claim a deserved overall podium from starting sixth on the grid. “That was worse than Knockhill,” the Scotsman said of the conditions after a first class performance. Plant battled home fourth, which was scant reward for his early race pace. Like Plant, Daniel Lloyd (Huddersfield) had to contend with no front splitter which affected the car’s handling in the fast corners, but he still claimed fifth at the flag.

Al Harthy (Oman) always set the pace in Pro-Am1 and took sixth overall as well as a resounding category victory. He spent many laps tracking Chris Dymond (Brackley) and finally worked ahead on the final lap. “I think I was faster than him, but I just couldn’t see anything,” said Al Harthy.

Further back, Oly Mortimer (Edinburgh) battled hard to take second in Pro-Am1 after a lengthy challenge from Victor Jimenez (Spain). “It wasn’t the amount of grip that was the problem, it was the standing water,” said Mortimer. Jimenez lost his splitter later in the race, but the chasing Derek Pierce (West Kilbride) suffered the same problem and was not able to challenge the Spanish driver for the final Pro-Am1 podium place.

“That was my first race in the rain: I couldn’t see a thing,” said Mann (Shenfield) after she coped remarkably well in the conditions to stay in touch with the Pro-Am1 cars and claim another Pro-Am2 maximum score.


Round six
Lloyd scored a stunning debut Carrera Cup GB victory in a thrilling round six. In a race of ever changing fortunes, run with tread-less ‘slick’ tyres on a very slippery track, Lloyd battled ahead of long-time leader Butcher as Glynn Geddie charged through to grab second place.

In a race where the entire field started on slicks in the damp, and then had to cope with more rain mid-race, there was superb action throughout the field as drivers battled successfully to stay on track. In Pro-Am1, Al Harthy completed a perfect weekend with another victory, while Mann again scored maximum Pro-Am2 points after her first taste of racing in such conditions. 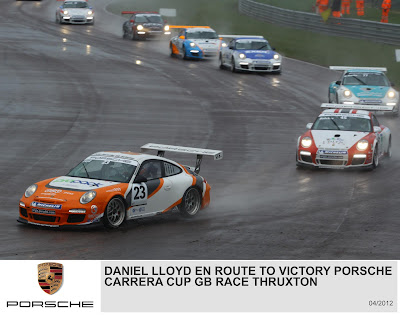 Butcher is renowned for his pace in tricky conditions and he burst into the lead at the first corner, while Lloyd turned in a stunning opening lap to go from eighth on the grid to second place. Meadows slotted into third, while Geddie (Aberdeen) charged through from 11th on the grid to hold sixth place behind Jonas Gelzinis (Lithuania).
Despite losing the splitter from the front of his car on lap five, Lloyd maintained a dogged chase of Butcher and his prayers for more rain were answered mid-race. That mitigated the loss of the splitter somewhat and allowed him to stay close to Butcher as Meadows held a watching brief in third and Geddie hunted them all down.

Conditions mid-race were incredibly tough as the rain returned, but the driving standards were superb as Butcher fended off Lloyd. But Geddie was the big threat now, having demoted Meadows, and by lap 18 the leading trio were almost nose-to-tail. Out of Church corner a lap later, Butcher and Lloyd were side-by-side and they raced level up to the Chicane with Geddie close behind. Lloyd tried for the outside, but Butcher’s car snapped into a spin and Lloyd had to straight-line the Chicane to avoid contact.

Now it was Lloyd leading under pressure from Geddie and the Carrera Cup Scholarship driver held on for a debut win by just half a second. “Rory did a great job leading,” said Lloyd. “When he spun I had nowhere to go: it’s just fantastic to get my first win.” After his best drive of the season to date, Geddie commented; “We needed that result.”

Butcher had given his all in supremely tough conditions and completed the podium as Meadows ran home fourth. “That was about Championship preservation,” said the pragmatic Meadows, who had wisely opted to make sure of another strong finish rather than take big chances. Barker and Gelzinis completed the top six.

Al Harthy again won Pro-Am1 from seventh overall, having raced clear of a long tussle between Mortimer and Jimenez. “That’s been the toughest weekend I’ve had in the Carrera Cup,” said Al Harthy. “The conditions were incredible, and we’ve had two really strong results.”

The next round of the 2012 Porsche Carrera Cup GB Championship takes place at Oulton Park, Cheshire, on June 9/10.
Posted by Unknown at 17:04