The first race weekend of the British Formula Renault BARC Championship was one of mixed fortunes for 20-year old Michael Epps. Having a nasty crash in qualifying in wet conditions, he was on the back foot all weekend starting last in all three races. He came through however, to post some good results against a very competitive field.

Michael showed strong pace throughout Friday’s testing in dry conditions and was very confident following the last session. The Race Drivers Inc. member commented: “We had a few troubles in some of the high speed corners earlier on in the day but as we made aero changes and used better tyres things improved. The new tyre run at the end of the day was great, but hampered slightly due to light drizzle wetting the track. We are right there with pace though.”

“British” weather greeted the BARC paddock on Saturday morning, with the track damp and getting wetter with on and off showers. Michael had not one lap of experience in wet conditions in the car and so was finding pace every lap. Unfortunately on his last lap, desperate to find time he locked up into the first corner, running off the circuit. As soon as he hit the grass he was destined for a big hit with the barriers, wrecking the front of the car and his qualifying session.

It was a harsh and unfortunate blow for Michael, who would now miss the second qualifying session for positions in Race 2 and 3. “To be honest it shook me up a little bit”, he commented. “I braked a bit later, but got a little sideways and locked up the fronts I think. The car practically accelerated once I hit the grass and next thing I knew I had a tyre wall stuffed up in my face.”

Team Jwa-Avila fixed Michael’s car up quickly as the weather dried out for the afternoon race. Michael had managed to qualify 15th for the first race, but more troubles were yet to come. As the whole grid revved up ready as the lights went out, Michael overheated his clutch and stalled the engine. “I loaded the clutch a bit early, it suddenly engaged and I jumped forward before the lights had gone out. I tried to start it but I couldn’t get the clutch to disengage and couldn’t get it into neutral either.” He eventually got the car started and pulled away.

By this time Michael had lost all his positions and a huge amount of time on the whole field, nevertheless he charged on and managed to catch a few to get to finish 19th. His lap times were actually fast enough to compete right at the front. He uttered after: “I’m so annoyed with myself, this is the worst day I’ve had racing in ages, maybe ever. I just need to come back tomorrow and prove myself.”

Sunday morning was the warmest it had been all weekend, and dry too. Starting last, Michael got a good start and overtook 5 cars through the opening two corners. Now sitting in 20th he charged towards the next few cars and with a couple of incidents ahead he climbed to 15th. The next car ahead began to block Michael dangerously, then followed a safety car to remove a couple of cars from the sidelines. Once the safety car was in the car ahead continued to block. “I didn’t want any more damage, he was weaving all over the track and I just couldn’t get alongside. I probably could’ve made a few more places if it wasn’t for that.” The driver was warned by the Clerk after the race and Michael finished 15th.

Heavy rain pelted down in the afternoon for the last race. Starting last again, Michael got a blinding start and passed a few cars on the first lap. He then picked his way through to 15th spot with a gap ahead to the next few cars. Getting faster and faster through the race, learning the new conditions, he eventually caught the next pack and passed a couple more to finish 13th. 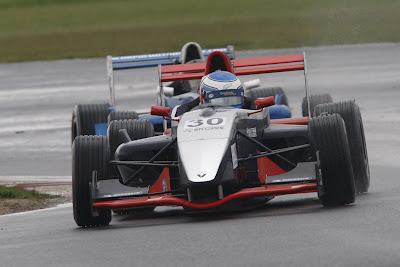 Epps now lies 15th in the Championship after a tough start, but he made a total of 28 overtakes during the 3 races, showing great potential. “I’m pleased with the results considering my starting positions. I need a good qualifying next time, it’s so important. I’m really gutted about Saturday, but a fair few others had their own problems today so I’m sure it’ll all even out soon.”

The next 2 rounds are at Rockingham Race Circuit on the 18/19th May. Keep up to date with Michael’s progress on www.michaelepps.co.uk and follow his twitter @MichaelEppsUk. Also follow his official partner and local gym Anytime Fitness - @ATFitnessUK
Posted by Unknown at 14:34