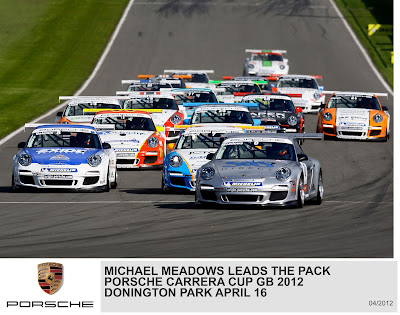 Round three
Meadows (Banbury) got just the start he wanted to lead the pack into Redgate and edged clear in the opening laps as a fierce battle developed for second between Sam Tordoff (Leeds), Richard Plant (Sheffield), Ben Barker (Cambridge) and Jonas Gelzinis (Lithuania). Gelzinis struggled with his start, the team having fitted a new clutch after qualifying and he got too much wheelspin and he dropped from second place to fifth.

On lap three, Tordoff missed a gear at the chicane and instantly dropped back to fifth, which helped Meadows build his lead to nearly three seconds. But as the race progressed all was not entirely well with the lead car. “Mid-way through the race I was locking the rear brakes,” said Meadows as Plant inexorably closed the gap. But it all went wrong for Plant when a front tyre deflated as he dived down to the Old Hairpin on lap 13.

This saw Barker chasing Meadows while also trying to defend from the challenge of the resurgent Gelzinis and Tordoff. With three laps to go, Meadows had barely half a second in hand as Barker came under intense pressure from Gelzinis and Tordoff. Into the final lap, the four cars were nose-to-tail and a relieved Meadows took the flag just a quarter of a second ahead of Barker with Gelzinis and Tordoff in their wheel tracks.
“I was struggling a bit and had to push harder than I wanted,” said Meadows. “I was just counting the laps down to the finish.” 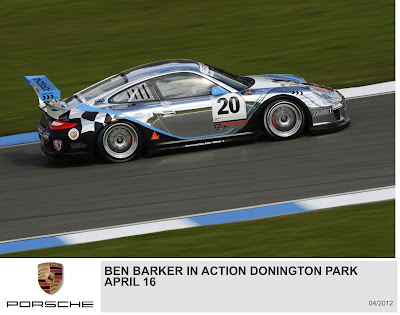 “It was so tight at the front, ridiculously close,” said Barker. “Michael got a gap when we were fighting, but we got up to him at the end.” Gelzinis completed the podium despite losing time at the start. “I just got my head down and drove very quickly,” he said, after smashing the lap record by half a second. “But I didn’t want to take any big risks,” he added. For Tordoff, fourth place was scant reward for his pace.

Al Harthy always set the pace in Pro-Am1, and had one or two Pro category drivers between him and the rest of the Pro-Am1 field as he claimed a stylish victory. “That was a perfect race for me,” he said afterwards. “I kept my head down and concentrated the whole race.”

Derek Pierce (West Kilbride) was a strong second, following a fierce battle between Glynn Geddie (Aberdeen) and Rory Butcher (Kirkcaldy) for many laps. Pierce then worked ahead of Geddie to take seventh overall. “The car was really good and I’m pleased to have gone from eleventh to seventh,” he said.

Victor Jimenez (Spain) completed the Pro-Am1 podium with a strong run. “That was fantastic,” said the Spanish racer. “Now my start is good.” Meanwhile Mann ran alone in Pro-Am2, but drove well to chase the Pro-Am1 pack for many laps before a quick spin at the chicane.


Round four
While Meadows stayed ahead of Gelzinis to make it three wins from four races this season, Porsche Carrera Cup GB Scholar Daniel Lloyd (Huddersfield) starred with a fighting drive to grab third place on the final lap from Tordoff. Despite constant pressure from Pierce, Al Harthy won Pro-Am1 for the second time, while Mann took Pro-Am2 with another strong performance.

Meadows dived ahead at the start from pole position as Gelzinis forged through to second at the expense of Team Parker Racing team-mates Tordoff and Plant. This quartet soon started to edge clear and their escape was aided when Barker spun off into the tyre wall at Schwantz Curve when battling with Lloyd for fifth. 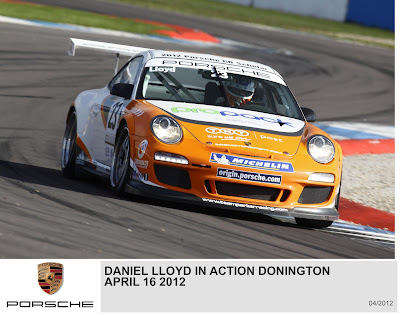 Gelzinis stalked Meadows for a dozen laps but the decisive moment in the lead battle came when the Lithuanian had a big moment under braking for the chicane and lost nearly two seconds to Meadows. “Maybe there was coolant down on the track,” he said afterwards. “I didn’t want to push Meadows too hard at the beginning.” With two such evenly-matched cars, the gap was now too big for Gelzinis to narrow it down and Meadows was able to carry a two-second advantage to the flag. “We were really quick in that race and I was able to edge out the gap,” said Meadows. “We made quite a few changes to the car for the second race and they worked.”

The action now centred on the contest for third as the trio of young Yorkshire racers from Team Parker provided the fireworks. Tordoff lost third position with a moment on the grass on the exit of Coppice and then set about closing back up to Plant as Lloyd chased them both. By lap 20, they were nose-to-tail and into Redgate with two laps to go Plant locked a wheel and ran wide, instantly losing two places. Now it was Lloyd attacking Tordoff and they ran side-by-side into Redgate for the final time. Lloyd edged ahead on the exit and they raced side-by-side through Hollywood in a display of fine racing.

“Sam went defensive into Redgate and I got a bit of a cut back,” said Lloyd after a great contest. Plant deserved more than fifth for his efforts, and only just held off the charging Butcher on the dash to the finish line. 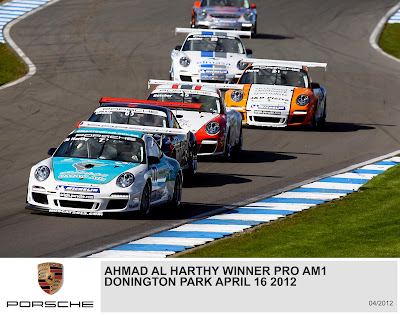 In Pro-Am1, Al Harthy led all the way but was kept under constant pressure by Pierce and was still less than two seconds ahead at the flag. “It was a very hard race from start to finish,” said Al Harthy. “That’s the first time we’ve had a perfect weekend with two wins.” Meanwhile, Pierce had driven a great pursuit. “I chased and chased and never gave up, but it was his weekend this time.” Jimenez completed the Pro-Am1 podium.

The next round of the Porsche Carrera Cup GB Championship takes place at Thruxton, Hampshire, on April 28/29.
Posted by Unknown at 19:35